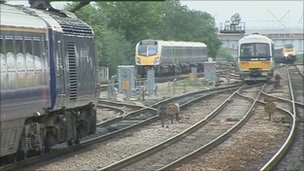 This is getting stupid, this was the third time I’ve been effected by these copper thefts in three months. Once at West Drayton and twice at Tilehurst. These places must be weak points in the track side security, as also there has been multiple trespassing incidents and one fatality.

Network Rail and First Great Western should be congratulated for the speed in which they get things up and running again (to an extent) after an incident, but also shouldn’t the security fences and CCTV be tighter.

Trains have been hit by delays after vandals stole copper wire from a signal point in Berkshire.

A reduced service is running between Reading, Oxford and Swindon after damage was caused near Tilehurst.

Services that are running are facing 40-minute delays while CrossCountry trains that usually operate in or out of Reading are being diverted.

In a separate incident, a signalling issue means there is a replacement bus service between Aldershot and Ascot.

Street of gold by ~Geminianum

What happened to this?