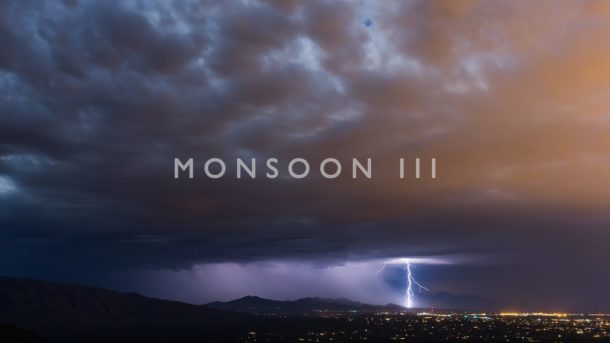 If you asked the average person, many would characterize this summer’s monsoon as a down season. Not a lot of storms overall and it seemed generally more quiet. And in many ways it actually was a slower season. All told I chased about 36 days for this film, which was less than the 48 in 2015. We had an early start in late June, and then it was dead for almost three weeks. When I looked back and realized I chased 12 less days…yeah, it definitely had less action than normal.

But to a storm chaser, none of this really means anything. Sure there were days when nothing was remotely possible to chase, but most of the time the monsoon can be found in the far corners of the state even when Phoenix and Tucson are dry as a bone.

For me personally, I loved this season. Maybe because as a filmmaker, having put out a few of these films now, I’m beginning to focus and hone in more on what I really love to time-lapse. My early scenes years ago had a lot of average clouds and distant rain that didn’t have a lot of excitement or energy. But as the years go on, and I learn more and more about chasing storms here in Arizona…I’ve found myself in better spots to capture the stuff I really enjoy. Strong downbursts of rain, building clouds, lightning…and yes, dust storms.

The one thing I was hoping for in 2016 that the previous years have lacked: Haboobs. Dust storms. Rolling walls of dirt and sand engulfing the deserts and even Phoenix itself. And my wish came true in that regard. Even a very late season, September 27th haboob that I captured right at sunset with glorious colors.

Coming off the heels of filming Vorticity in the spring, with monster supercells and tornadoes, the monsoon is a totally different beast and you’d think it would be less exciting. I don’t know. I find them both amazing and inspiring. Weather to me is weather. No matter how mind-blowing it was to witness the Wynnewood tornado this past spring, standing in front of a rolling wall of dust, or a distant lightning storm under the stars…it’s all a blast to me and I never get tired of it.

So Monsoon III…the credits will say it, but it was around 36 days of filming, I shot over 85,000 frames and am not sure how much made it into the final cut. The song I used was “Revenge” and “Revenge: Epilogue” by Kerry Muzzey, and I took both of them and sliced and diced until I actually had a six-minute version to fit in with all the footage I captured. I love it.

As always…THANK YOU to Kerry Muzzey for supporting my work by letting me use his music once again. I don’t even have enough words for this man for doing this for me. It means more than anything! Please buy his work!

I started editing this film mid-summer once I figured out the song I was using. And as days went by and more clips were rendered, I kept adding them and re-arranging them all the time, trying to get every clip to match the tone and feeling of the music. And then I’d think I was done and more storms would come and I’d have to move things around again, and even drop stuff. I have a lot of fun scenes that are not in this film because I only wanted the very best.

Special thanks to Bryan Snider and Dustin Farrell for some tips this summer on editing out dust spots and birds better than I had been doing. Appreciate it fellas!

My wife takes the brunt of what I do, especially when I’m gone for days at a time. Filming in Arizona is easier because I’m usually home at some point in the evening and at least around in the mornings. But it’s a lot of work and a lot of time being away. She supports me like no other and I can’t believe how lucky I am to have someone with that much faith in what I do.

And a lot of these clips will forever hold memories for me because my two oldest kiddos were there for them, and at times even all three were nearby. My littlest guy who just turned three, sits on my lap a lot when I edit, listens to the music and loves watching the final product. And he wants to keep watching it…over, and over and over.

I hope you enjoy this latest installment. I’m not sure how it compares to years past, but for better or worse, this was Monsoon 2016 for me!

Please let me know if you have any questions about anything! Most of these clips were shot in 8K with some 4K stuff thrown in there as well.