In response to the changes and modernisation plans we have announced for London Underground, I am sorry to tell you the RMT and TSSA unions have called two 48‑hour strikes. 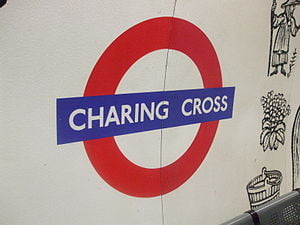 If the strikes go ahead, Tube services will be affected from:

We will work hard to run as many trains as possible, but there will be disruption. TfL Ambassadors and volunteers will be on hand to offer travel advice. The DLR, London Overground, and other rail services will operate normally but will be busier than usual. We will enhance our bus services on key routes and you may wish to consider cycling, if possible. Walking may be an option for shorter journeys.

Based on TfL’s info here what I estimate the tube map will look like on strike days. 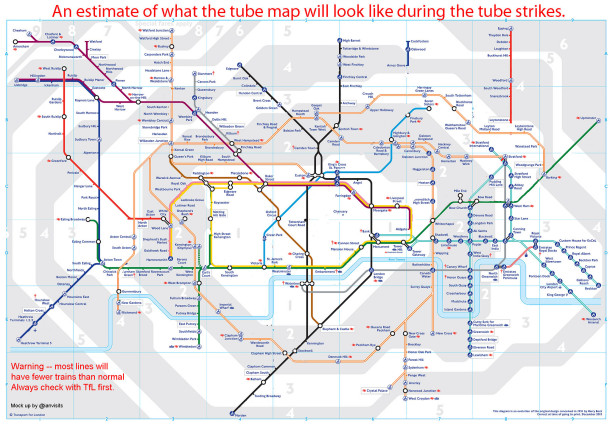 Click on the image for a much larger version

Future of the Tube

The changes that we are proposing to make will mean our staff will be more visible and available, with stations staffed and controlled at all times. We will introduce a 24‑hour service on core parts of the Tube at weekends from 2015. For details of our plans, please visit tfl.gov.uk/futuretube

Should the RMT and TSSA strike action go ahead, LU will keep as many stations open and run as many trains as possible.

However, there will be disruption to journeys on Wednesday and Thursday.

Buses and other modes of transport may also be very busy.

A 24-hour strike has also been called by the leadership of the ASLEF union at London Tramlink.

The dispute is between the operator of Tramlink, First, and the ASLEF union over the dismissal of two drivers.

Should the strike go ahead, it is likely to cause disruption to Tramlink services on Wednesday 5 February.

Those public transport workers who are on duty during the strike will be doing their very best to keep London moving and open for business.

TfL asked customers for their patience during what may be difficult journeys.

TfL Ambassadors and volunteers will also be on hand to provide customers with travel information and advice on the ground.

TfL urged all customers to plan ahead and to check before they travel at tfl.gov.uk and by following @TfLTravelAlerts, @TfLTrafficNews and @TfLBusAlerts on Twitter.

Tube services will be disrupted from Tuesday evening so customers are urged to try to complete journeys as early as possible. Tube services will not return to normal until Friday morning;
LU will set out more detail on the service it intends to offer on all lines ahead of next week’s strike.

A normal service will operate. Some stations where there is an interchange with London Underground may be affected.

London buses operate around 700 routes and services are being boosted with over a hundred extra buses on key routes;
TfL Ambassadors and volunteers are being deployed to bus stations and hubs to provide customers with travel information and advice on the ground.

A normal service will operate. Some stations where there is an interchange with London Underground may be affected.

Tramlink services are likely to be disrupted on Wednesday 5 February due to strike action called by the leadership of ASLEF;
Customers are advised to check before travelling at tfl.gov.uk and @tramslondon and to seek alternative routes, where possible.

Barclays Cycle Hire will be available to members and casual users, although demand is likely to be high, and cycles harder to access, during peak times;
Londoners who own a bike are encouraged to cycle to work, and a Cycle Journey Planner is provided http://www.tfl.gov.uk/cyclejourneyplanner;
TfL is writing to hundreds of businesses across London to ask them to be flexible and make it easy for staff to cycle to work, and to allow staff to wear casual clothes on the day.

Enhanced River services will be in place, including on Route RB1 between Greenland (Surrey Quays) / Canary Wharf and London Bridge; and,
An additional centre London service (Tower/ Bankside / Westminster / London Eye) during the AM and PM peaks;
In combination with the normal timetabled service, this will provide a 10 to 15 minute frequency on most central London piers during the morning and evening peaks.

Between 7.00am and 11.00am on Wednesday 5 February, Thursday 6, Wednesday 12 and Thursday 13 February, a marshalled taxi service will operate at seven major London rail termini – Waterloo, Liverpool St, London Bridge, King’s Cross, Victoria, Charing Cross, and Marylebone. The marshals will manage taxi and passenger queues and provide advice and assistance to taxi passengers and other members of the public;
Between 7.00pm and Midnight on Tuesday 4 February and Tuesday 11 February, a marshalled taxi service will operate at the same seven stations, plus Euston;
Private hire and minicab services will be running as normal. Details for licensed private hire and minicab operators in London are available at tfl.gov.uk/cabwise.

Oyster Pay As You Go is accepted for all National Rail journeys within Greater London;
Travelcards are also valid for travel on National Rail within the zones purchased.

Walking maps will be provided online, in bus, rail, and Tube stations in Zone 1 and other key outer London stations, with TfL Ambassadors and volunteers helping people plan their routes around the city;
People are urged to consider walking for short journeys, where possible.

Roads and the Congestion Charge

To help keep traffic flowing, the Congestion Charge will remain in operation throughout the strike;
TfL will be delaying or curtailing road works on major London roads wherever possible and has encouraged all London boroughs to take similar measures on their network. TfL will also work with the Metropolitan Police to minimise the impact of congestion;
TfL will be working to keep traffic flowing around major transport hubs;
Londoners and commuters are encouraged to keep journeys by car to a minimum to enable public transport to move freely.

Several coach operators, including National Express and Green Line, offer services that stop in a number of locations throughout London. Some of the core coach routes are as follows:

Changes to services into and through London Bridge